As far back as the 12th century, Chinese peasants were creating paper cutouts in vivid colors to decorate windows, lanterns, gift boxes and other objects. This Chinese practice and expertise with scissors is thought to have come from Eastern Siberia, where cutout felt figures and designs were decorating objects in the tombs of Siberian nomads. The tombs date back to before Christ.

German and Polish artisans have also been using cut paper for decoration over several centuries. Polish women and children in particular, developed enormous skill with folded colored papers which they cut freehand into geometric shapes and stylized birds, animals and flowers.

However, it is the late 17th century lacquer work from the Far East, mostly in the form of furniture, which we tend to associate with today’s decoupage. Oriental lacquered objects became fashionable in Europe and in no time demand exceeded supply. As a result, Venetian cabinet-makers and lacquerers (called depentore) began to produce fake lacquer work to keep up with the demand. This work was known as lacca contrafatta-counterfeit lacquer.

Apprentices were employed by the artisans to hand-color the prints and engravings of leading artists. These were then cut out, pasted to the surface to be decorated and covered with many layers of lacquer to produce furniture and objets d´art that closely resembled the unique and popular work being brought by traders from China and Japan.

Parallel to this development, the wealthy classes were using master painters to paint their furniture and decorate their walls and ceilings. However, in time, because of excessive demand and the fact that many people could not afford the works of the masters, an alternative form of decoration developed. Drawings from the artists of the day were cut out, glued down and covered with lacquer to resemble original paintings. From this derivation came the alternative term l´arte del povero-poor man´s arts. 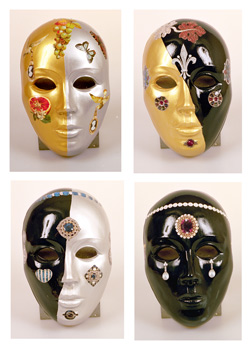 During the 18th and 19th centuries this art form flourished throughout Europe. It even infiltrated the court of Louis XV. Ladies with an artistic bent snipped away at pictures and pasted them onto hatboxes, wig stands, fire screens and toiletry objects, keeping themselves amused for hours. The works of Boucher, Watteau, Fragonard, Redoute, Pillement and many other distinguished artists came to this sticky end. Many magnificent examples of fine cutting, coloring and design can still be found today on bureaus, chiffoniers, armoires and similar pieces of furniture as shown in the photograph.

Mention must be made of a certain Mrs. Mary Delaney who lived in England from 1700 to 1788. This charming, witty and talented woman was a confidante of King George III and Queen Charlotte and a greatly loved member of their court. Her close friends included William Hogarth, Jonathan Swift and Sir Joseph Banks. Amazingly, at the age of 71, Mary started producing the most exquisite and botanically accurate reproductions of plants and flowers by cutting up fine tissue paper which she had first hand-colored. She produced her “paper mosaics”, as she called them, until the age of 88 when she succumbed to failing eyesight. These superb paper cutouts can be seen in the British Museum today.

Like Mrs. Delaney, many gentlewomen in 18th century England became very adept with scissors and were engrossed with the art of decorating with cutout images under lacquer. This and the general skill of lacquering were known in England as Japanning. In 1760 a certain London printer, Robert Sayer, produced a much sought-after book called The Ladies Amusement or The Art of Japanning Made Easy. The book contained 1500 illustrations for artist craftsmen, but it was particularly popular with leisured ladies who loved to color, cut and paste the charming drawings. It also contained five pages of instructions on how to color, glue down, varnish and polish the cutouts. These instructions are preceded by “directions for composition” in which the reader is advised about the combination of subjects. “If the scene is European in the body of your design,” he directs to put in “no exotic or preposterous object¨s.We have seen a butterfly supporting an elephant and things equally absurd.”

In 19th century England, during the Victorian era, handcoloring and intricate cutting out gave way to the more sentimental, florid collage-style of this art form. This coincided with the introduction of Valentine cards, decorative and embossed papers and braids to embellish surfaces such as screens, lamp bases, linen boxes and mush more. Many a Victorian nanny taught her young charges to beautify objects by applying decorative paper pieces to them. While these decoupage pieces lacked subtlety and skill, they made up for it with a certain bold and sentimental charm.

Today, decoupage is having a stimulating and virile revival throughout the world with active guilds in America, South Africa, Australia, England and Japan. We owe our 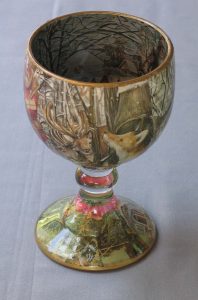 current knowledge and techniques in great part to the colorful Bostonian, Hiram Manning, and a small group of dedicated and talented decoupeurs, who put decoupage on the map in America and thereby led the way for others to follow. The National Guild of Decoupeurs was formed in the USA in 1972 and is greatly responsible for promoting this fascinating and beautiful art in its finest form.

Decoupage is a 20th century word which comes from the French word decouper meaning to cut out. Paper cutouts are reassembled and designed and then glued to a painted or gilded surface. The most traditional technique includes applying 30-40 layers of varnish which are sanded to a beautiful smooth sheen. However, cutouts may also be applied under glass or alternatively raised to give a three-dimensional appearance. With such a long and varied history, it is not surprising that decoupage is still evolving with new styles.

With its colorful origins and variety of techniques the possibilities for this fascinating art form are infinite, offering scope for endless hours of creativity as well as enjoyment.